The award-winning Grouchy Puppy® dog blog was founded over 10 years ago by Sharon Castellanos after she found online and across social media that the prevailing attitudes towards big dogs, adopted dogs, and senior dogs was that they were simple, one-dimensional opportunistic creatures. Based on her own history and experiences with dogs, she knew they were so much more.

In late 2014, Sharon lost her beloved old Cleo, a Husky-Shepherd mix who was adopted as an adult and became her muse. Sharon writes, "while their body may depart from our lives, a dog's presence will never leave us." How can you measure love and companionship with the simple yardstick of time on earth? 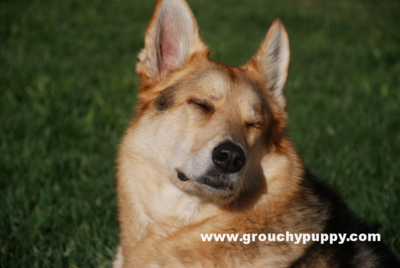 Grouchy Puppy is about showing how the positive influence of the human-animal bond is demonstrated by dogs and those who love them. It's purpose is to elevate the conversation about dog adoption and senior dogs, and to influence, and change tired, antiquated beliefs.

With 25,000 active followers on Instagram, Twitter and Facebook, Grouchy Puppy represents a group of dog lovers who care about making a difference in the lives of our faithful companions.

Grouchy Puppy on Pinterest includes 25 boards of dog-centric inspiration, as well as adoptable dogs from Muttville Senior Dog Rescue in San Francisco and other rescue groups. It's a great resource for dog lovers.

And despite its title, this year's winning Beast of the Bay Award BEST DOG BLOG is decidedly non-grouchy. In fact, Grouchy Puppy has a passion for positivity. Start reading now.. - M. Rocket, Bay Woof Publisher

Each time I visit Grouchy Puppy I find something helpful and interesting, written by someone who really cares about animals. I know I can count on Grouchy Puppy for current, consistent and positive news, and that never makes me grouchy! - Peggy Frezon of Peggy's Pet Place